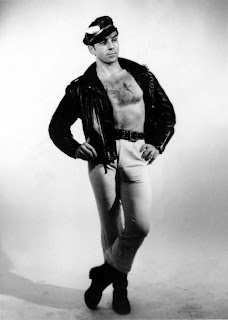 Here's a photo by another man who knew how to pack a model into a pair of pants!

In the Summer 1958 issue of "Physique Pictorial," Bob Mizer wrote the following article on what he deemed excesses by a couple of certain photographers --

Though the great majority of persons interested in physique photography and art are idealistic in their concepts and are dismayed at vulgar displays, there seems to be a limited segment with a one-track mind interested in seeing an exaggerated masculine appendage. While the average physique photographer does not force his models to wear a steel corset or truss under trousers or trunks to insure complete lack of form, neither does he go out of his way to point up more form than is naturally apparent. But a couple of photographers, particularly one on the U. S. East Coast and one in England, have apparently reasoned that if girls with flat breasts can wear falsies, why can’t ungifted men do something similar. Consequently, one of these uses an object known as a “dildoe,” while the other employs an old sock appropriately molded. The result tends to be ludicrous rather than sensual. While some customers of these firms have been offended by the ridiculous, unnatural exaggerations, others have been annoyed by the insult to their intelligence.

There is a considerable difference between a picture done for vulgar display and one done to portray beauty and handsomeness. There is also a certain border line which it is wise for photographers to consider a “no man’s land.” This border line shifts from year to year – sometimes more liberal, sometimes more strict. Greedy or unthinking photographers who consistently go to the extreme tend actually to galvanize the opposition to all physical display, and thereby push the borderline into the stricter side.

Frankly, we feel that an athlete sporting an exaggerated artificial “bulge” looks as ridiculous and unaesthetic as a boy sticking out his tongue. We have personally written our sentiments to some of the offending photographers but thus far they have remained silent. If you should at any time receive mailings from such firms, write them a letter urging them to keep their offerings clean and thus avoid catastrophe for themselves as well as the entire physique field.

The two artists he was referring to were obviously John Palatinus and Scott of London (Tom Nicoll). Both artists' sensibilities were sympatico, though they formed independently on separate shores. In 1959, Palatinus would be arrested for selling his "lewd" photos through the mail, and in the very early 60s Nicoll would put his camera away, apparently voluntarily.

Now, 50 years later, you'll be able to see this photo of Bob as part of an exhibit of Palatinus' work to be held in Paris at the gallery Au Bonheur Du Jour in just a few weeks....

Continuation of "THE N-A-K-E-D TRUTH"

[…] Finding they can "get away with" simple nudes some customers arrogantly and belligerently demand "more advanced" presentations.

Of course we realize that we are here on rather indefinite, unstable ground because at what point does a nude become naughty instead of nice. In a seated pose, is the model properly modest if he keeps his knees no more that say 14 inches apart? At 14 1/2 inches would he then become obscene? Obviously such delineations are entirely subjective and dictated by an individuals (sic) own particular mores and background. Most firms in the business have attorneys who attempt to keep an anxious finger on the pulse of current legal interpretations on these matters and their tendency is to warn their clients to stay well within the "safety borderlines".

What is your own thinking on this matter. If material using nude male models were offered that was restricted to material that an attorney felt could be successfully defended in court if need be, would you be interested? We could appreciate hearing from you. (p.3)